Beyond the Mist (Lake Lanier Mysteries #2) by Casi McLean 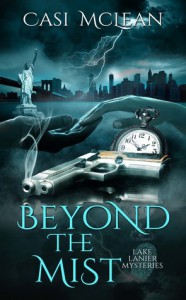 This is my first book by Casi McLean even though it is the 2nd book in the Lake Lanier Mysteries Series. I will be checking out book one very soon. This can be read as a stand alone, but you do have to really pay attention at first until you get used to which time line each person is from. For instance Nick's father was born in 1921, his mother in 1983, they bump into Nick when he is 30 years old. I do want book one to get more of a the back story though, some things would make a lot more sense. Casi has done a really good job with this book. It is a Time Travel Novel. Casi has brought September 11, 2001 back to our memories. She is very respectful to the victims of 9/11

Nick Cramer has always blamed himself for his girlfriend Carlie dying in the 9/11 attacks. Then he finds a way to travel back in time to save Carlie. Their is secret portal hidden beneath Atlanta’s Lake Lanier. Nick knows he should not mess with the time line of events in the past or the future but with a big heart and also a broken heart he still wants to save Carlie.

Nick meets Piper Taylor and knows there is something special between them, but his guilt over Carlie urges him on.

Piper must avoid the terrorism in 2001, find Nick, and get them back to their correct time before before Nick makes any changes that will put a rip in time and they become lost in time forever.

I received this audiobook as part of my participation in a blog tour with Audiobookworm Promotions. The tour is being sponsored by Casi McLean. The gifting of this audiobook did not affect my opinion of it.