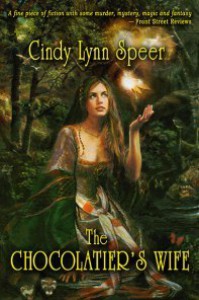 This was a very enjoyable book for me to read. Lately I have been having a stale feeling to most of the books I have been reading. Not that those books were bad in any way, they just seemed to pretty much the same story with different people and in different places. This book had a whole new story and has refreshed me. I think Cindy Lynn Speer has done a great job with this book. I like how she gave great descriptions but did not babble on. You got enough to understand where the story was taking place, or enough to figure out the person's reasoning, and things like that but there wasn't 3 pages over nonsense that had nothing to do with the story.  The book was not over romanced either, actually there really was very little romance since where these characters live Love does not really come into the emotional play like in our world.

In the kingdom of Berengeny when children are born they are taken to the Wise Woman who casts a spell to choose the child's future spouse. One of the main characters William was taken to the Wise Woman and no face appeared to her. He was taken back each year with no results until his 7th birthday, when finally the face appeared. The Wise Woman then holds a brass plumb-bob over a map to see where the spouse lives. To his families dismay she lived in the North part of the Kingdom. The North and South parts of the Kingdom have been fighting for over 500 years.

William does not take this badly and sends a letter to his intended Tasmin Bey. She is still a baby at this time. William continues to send letters and gifts over the years to Tasmin. They become friends through these letters and are actually excited about finally meeting each other face to face. Even though both sets of parents do not wish for this marriage to ever take place.

Finally Tasmin turns 18 and is sure William will send for her. But he does not. He has been a sea captain and decided it was time to return home open a Chocolate shop and send for Tasmin as soon has his business is making a decent profit.  But then he is accused of murder. He is arrested for killing the local Bishop with poisoned chocolates from his shop.

William writes tasmin to let her know she is off the ook to marry him an accused murderer and that he is innocent. Tasmin goes to William to try and help clear his name. you will have to read the book to find out what happens next.