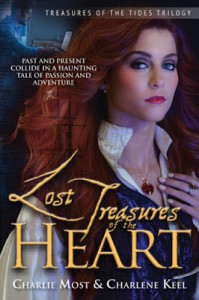 What a great book. It is actually the story of 2 people 300 years apart.

Johnathon is a architect in the present. His marriage has crumbled due to his wife having an affair with his friend and employee. He goes on fishing trip with a group of friends to North Carolina. One night during a storm him and 2 friends spot a ghost ship. Only Johnathon sees the beautiful red headed captain though. She immediately starts haunting not only his dreams but his waking hours as well.

Kate Russel was raised in the lap of luxury along with her orphaned cousin. Kate falls for a rogue pirate and fancy's herself in love. When he comes back to port one day she finds out not only was he using her but her cousin was as well to gain her father's fortune. During an argument where he starts to go after her cousin she picks up a knife and stabs him to save her cousin. She ended up killing him. Now she is on the run from Blackbeard. She tells her father who immediately signs over his ship to her and sets in motion her get away. She was supposed to sail to England and start her own legal shipping business but along the way she ends up going rogue and becomes a pirate.

Johnathon is so obsessed with Kate and the Ghost Ship he buys a house in Kill Devil Hills, leaves his family behind, leaves his right hand man in charge of the business, and locks himself away so he can watch for the ship again. He starts seeing Kate everywhere though and knows she is asking him for help. He just cannot figure out what kind of help. A small chest washes up on shore during a hurricane holding Kate's most precious possessions. Now he must figure out what all of this means.

This was a great story I really enjoyed every minute of the book. The 2 stories flowed very nicely together. The characters were all very well laid out too. Can't wait for book 2.